Culturally, Russia is one of the world’s great treasure chests of fine art of every description. Not the least of these national treasures are the country’s architectural creations. With all the conflict in our world today, it seems appropriate to remind people of beauty and progress. To this end, here are five projects that really should take your breath away. 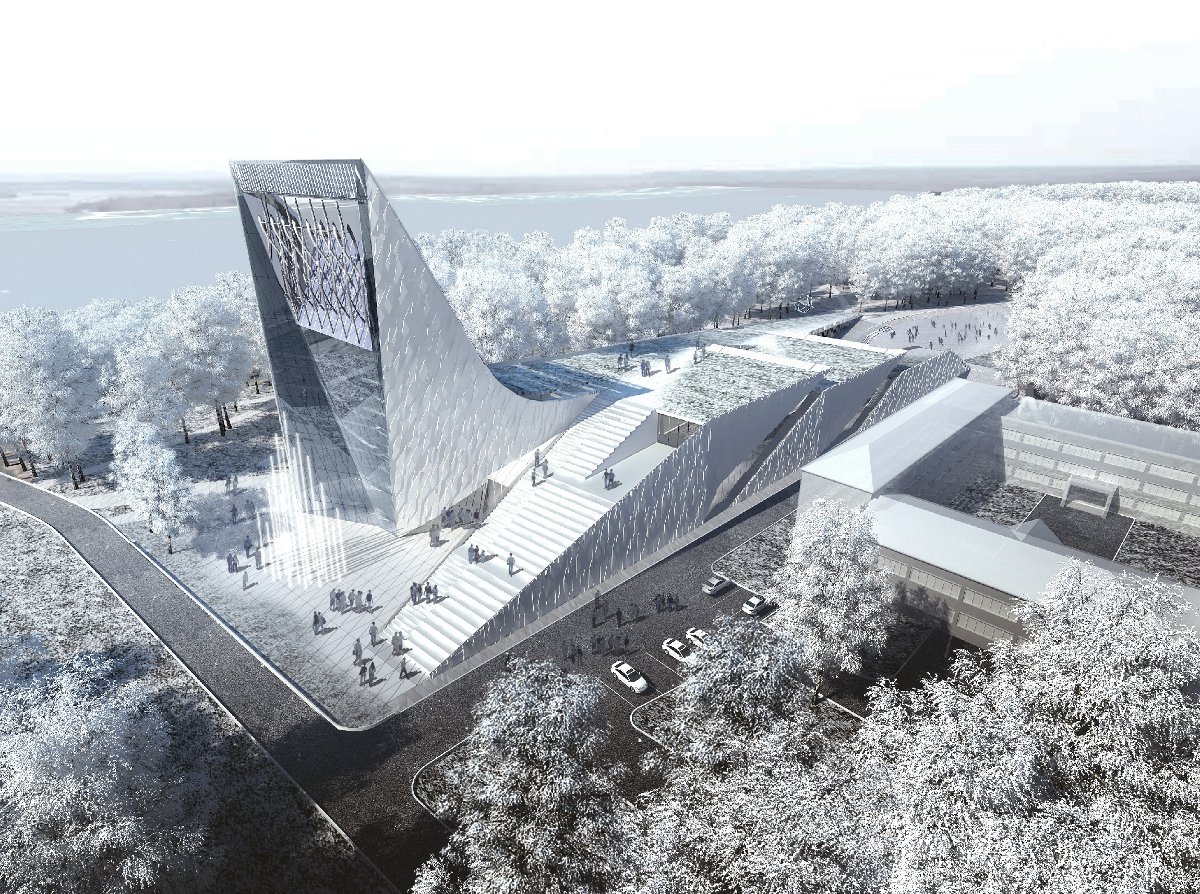 Referred to as a “museum above the park,” and as a “park of a museum,” the Science Museum of Tomsk is a work of nature and art in itself. A visionary project organized by SAR bureau, the international contest to conjure the proposed Tomsk museum took place in the autumn of 2014. “Science for people” has now become a byproduct of a larger scale project called the “Tomskie Naberezhnye” ( or Tomsk Embankments).

You can view many of the award winning contestants here, but the image shown reflects the grand scale and simple elegance of the vision. The Asadovs, when asked about their work, reflected the common dichotomy of modern architecture, or the unique function and and sustainable form of the project.

To find out more about this and other similar projects, please visit the Asadov Architectural Bureau here.

This magnificent development has a massive scope when one considers “where” it will be located. The 16 hectare site is smack in the middle of St. Petersburg. The “City in a city” will include over 300,000 square meters of retail, leisure, hotel, residential, and office space, a massive rework of this historic village.

The unbelievably complex project will see the buildings of Apraksin Dvor nestle between Sadovaya Street and the Fontanka River, integrate with cutting edge design and environmentally friendly neighbors. The task of increased density, within this precious historic zone, has rendered some of the most creative and artistic designs on Earth. PRP, led by Andy von Bradsky, is one of the world’s largest multi-disciplinary firms has taken the lead on this stunning project.

The winning concept for Zaryadye is based on what’s known aswild urbanism, and idea where people and plants co-exist in the same space. The concept, as you can see, creates a clear system of interaction between nature, people, and the city surrounds. One thing that makes this concept most compelling arichtecturally is the integration with an already cluttered and concrete urban landscape like Moscow’s. The scale is a bit like adding Central Park to New York City, after the fact.

However daunting the task may be though, Moscovites will no doubt cling to the thought of being able to leave the city, while still be surrounded by it.  This theme of keeping the balance of growth and sustainability, while maintaining the same cultural values, is pervasive in many European and Asian capitals. Interestingly, the winning architectural firm for the project was a US firm, Diller Scofidio+Renfro, the designers team behind High Line park in New York.

For more information on this development, and its status, please visit the official website of the park project. An arrow pointed skyward into the clouds above the Russian city of Khanty Mansyisk, this stylish and stunning mixed use tower recreates the idea of a landmark. Living, working, and leisure activities will meld into seamless life amid the cold and often foreboding Siberian landscape.

Set high on a hill overlooking the city, this 20 meter + tall tower has the look and complexity of a hand cut diamond that refracts light similarly. Sustainability is once again the theme, as the building will be all about next generation energy and futuristic design. Created by Foster + Partners for STT Group, there’s no word on progress into the construction phases of this magnificent design by Foster. More information can be had here. When Russia won the bid for the 2018 FIFA World Cup, 100 big architectural firms foamed at the mouth at the concept of building sports icons for an emerging Russia. With  Moscow, being the only city with two stadiums and Saint Petersburg, Kaliningrad, Nizhny Novgorod, Kazan, Samara, Saransk, Volgograd, Rostov-on-Don and Yekaterinburg needing venues too, the gold rush for artistic creation was on. Among the design wonders.

Of course the Moscow Luzhniki stadium expansive is stunning, but the Dynamo Stadium, Moscow design is the most stunning. Erick van Egeraat’s and Mikhail Posokhin’s VTB Arena will be the main event arena, and visitors will be as awestruck as they are by match contests, simply for the incandescent lines of this sports palace. As you can see from the image, Dynamo Stadium’s initial designs were nothing short of an architectural masterpieces. The project has changed hands a couple of times since inception, but the progress seems to be not so far off schedule.

For more information about this project, please visit the website of the Dynamo Park team.

Freshwater “Miracles” of Crete Island
Crete is Becoming a Top Winter Refuge and Remote Working Destination
The Keftiu: Were They Absorbed and Erased from History?
Live Like Great Odysseus: Book a Week at Santa Thekla Peninsula
Previous: To have, or have not & Russian Tourists in 2015
Next: Top Festivals in Budapest This Spring