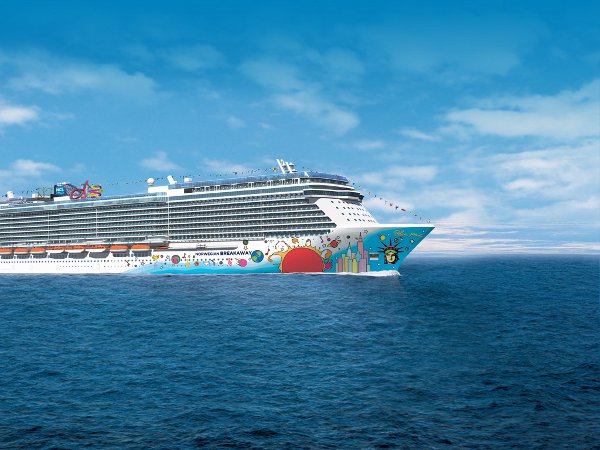 The signature hull artwork to be designed by Max will adorn Norwegian Breakaway when she launches in April 2013. According to the press from Norwegian, the artwork will cover the roughly 40,000 square feet of Norwegian Breakaway’s hull, a canvas even Max is proud to exclaim about:

“While it has been an honour to have my art exhibited in museums and galleries, I have also enjoyed creating giant ‘canvases’ for public view, including my 600 ft. Woodstock stage, a giant World’s Fair mural, the body of a Continental 777 super jet, and now, the hull of Norwegian Breakaway.”

Supposedly a composite of New York Cit’s iconic Statue of Liberty, the Manhattan skyline, a giant sunburst, planets, stars, and even  musical notes, the will be colorful to the extreme.  Norwegian Breakaway will become a floating artwork a total “breakaway” from anything traditional on the seas. For more info on this fabulous new cruise ship, please visit the official site of Norwegian Breakaway here.

We leave you with video from Norwegian Breakaway, a preview of the marvelous ship to come.

Campspot Publishes the Top Outdoor Travel Trends for 2023
Ideas to Make the Most of Your Visit to Phuket
Trends Say Americans Guarded Over Travel 2022
27 Inspirational Travel Quotes to Fire Up Your 2022 Travel Bug
Previous: Gelpme – Sharing That Once In A Lifetime Trip
Next: Far Frozen North Fun – Avantouinti