One of the world’s most magnificent hotels, Singapore’s Marina Bay Sands played host to Sir Richard Branson for a meetup of his Carbon War Room.
200 meters above ground at the Sands SkyPark. The media was invited to a press conference with Branson and other executives this week. 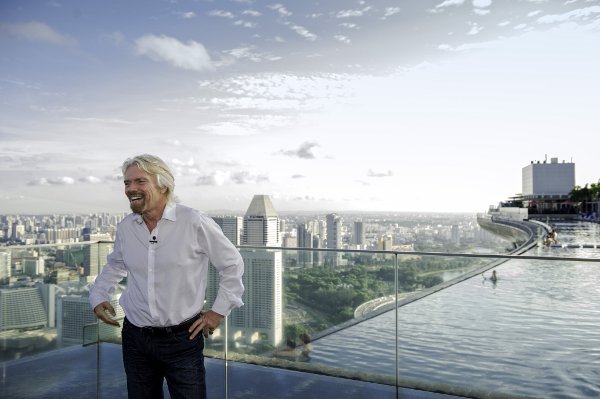 Branson, who is Founder of the Carbon War Room, is in Singapore for the inaugural Creating Climate Wealth Workshops Summit which began on 13 May at the Sands Expo and Convention Centre. Creating Climate Wealth (CCW), a global convening mechanism designed for entrepreneurs, innovators, capital providers, industry leaders and experts, targets opportunities for enterpreneuer’s to invest in solving climate change issues, rather than simply calling for action. In that arena, Branson’s end goal at Carbon War Room is to elevate theory into practice.

George Tanasijevich, President and Chief Executive Officer of Marina Bay Sands, had this to day about Branson’s visit and the War Room meetup:

“Marina Bay Sands is privileged to welcome Sir Richard Branson to Singapore. Hosting Carbon War Room‟s Creating Climate Wealth (CCW) workshops at the Sands Expo and Convention Centre is in line with our objectives in ensuring that our business complies with that of an eco-sustainable organization. This is further proof to the fact that Green business is indeed good business.”

Back in  May 2012, Marina Bay Sands joined EarthCheck a leading benchmarking and certification program for environmental sustainability. The hotel then began a scientific approach to benchmarking, and made a commitment on reporting the business’ environmental footprint based on those internationally accepted standards.

A Farewell To Another of the Small Gods of Crete, Nikos Zacharioudakis
A Word or Two About Ryanair CEO Michael O’Leary and Other Bean Counters
Expert Viewpoints: Hospitality 2021 and Beyond
Actress, Singer, Songwriter Rita Ora Vacations On Corfu
Previous: Places You Never Heard Of: Bilhorod-Dnistrovskyi in Ukraine
Next: Acromas Holidays Shuts Doors of Tailor Made Travel