Aliwal Shoal on Kwa-Zulu Natal’s south coast, is a scuba paradise where divers can swim among ragged-tooth sharks – without a cage! Shark dives – without cages – are nothing new in South Africa. On the Aliwal Shoal, 3km/5miles off Umkomaas on Kwa-Zulu Natal’s south coast, you can experience the thrill of diving with ragged-tooth sharks. Affectionately called ‘raggies,’ these sharks are gentle creatures, only becoming aggressive when provoked. 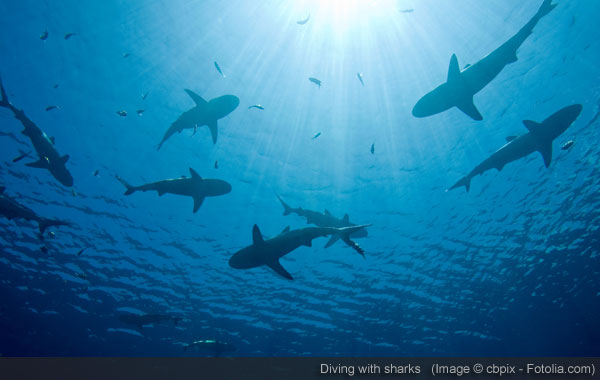 Umkomaas is a sleepy coastal village, nestled among endless fields of green sugarcane. Sleepy, that is, until the weekend rolls around and hordes of scuba divers arrive, intent on experiencing the rare thrill of diving with sharks.

Umkomaas lies on Kwa-Zulu Natal’s South Coast, which is reminiscent of the coast of England with its small seaside towns, coastal railway and holiday atmosphere. This is reflected in many of the town and village names, which include Margate, Hibberdene, and Scottburgh.

The South Coast’s attractions include long, warm and sunny days, even in winter, beautiful subtropical vegetation, and safe swimming on shark-net-protected beaches.

Aliwal Shoal is an extensive, submerged reef, primarily of ancient sandstone, and with a few shipwrecks thrown in to add to the underwater scenery.

Named after a ship which almost sank on the shoal in 1849, the shoal was more successful at wrecking the Nebo, in 1884, and the Produce in 1874.

Aliwal Shoal offers scuba divers a number of different dive sites, each with its own unique attractions and dangers:

At the northern end of the shoal, the Pinnacles offers the shallowest dives on the reef, between 4-15m/12-45ft. Excellent light penetration and an abundance of marine life make this a good site for diving later in the day when other, deeper sites will have poor visibility.

Probably the best place to see raggies, although it can become crowded with other divers. Depth ranges from 14-18m/42-54ft.

A very good site to see the raggies, especially when they gather here to escape the attentions of large numbers of divers at Raggie Cave. The site’s depth ranges from 12-15m / 36-45ft. This is also a good site to see dolphin, rays, skates and sand sharks.

The prime site for experienced divers, with excellent underwater scenery, often rated as the best in South Africa. Depth ranges from 20-27m/60-80ft.

Shipwrecks offer an unusual and spectacular underwater experience, although they can often be tricky to navigate and downright dangerous for the inexperienced diver.

The Nebo struck the shoal and sank bottom up in May 1884 in 30m/100ft of water. The wreck is breaking up slowly,and provides shelter for a large number of the fish.

The Produce went down in 30-33m/100-110ft of water in August 1974. Penetrating the wreck is no longer safe, as it is rapidly disintegrating and has become unstable. The wreck does, however, provide an interesting and scenic dive.

Ragged-Tooth Sharks or ‘raggies,’ scientific name Charcharius taurus, are known as Gray Nurse sharks in Australia, and as North Carolina Sand Tigers in the USA. They are usually docile animals, and rarely exceed 4m/12ft in length.

The raggies make an annual migration to Aliwal Shoal, arriving by early July and leaving at the end of September, the period corresponding with winter in South Africa. They use the time at Aliwal shoal to rest, before moving northwards up the coast to Cape Vidal, their mating grounds. The gravid (pregnant) females then move even further north to birthing areas in northern Kwa-Zulu Natal and southern Mozambique.

Raggies are oviphagous, which means that the egg hatches inside the female and the young shark – about 1m/3ft long is “born” ready to survive on its own. The female raggie has two uterine chambers in which fertilized eggs develop. The first young to hatch in each chamber kills and eats his siblings, and then continues feeding on the other unhatched eggs. After a gestation period of up to 9 months, the female raggie will give birth to 2 young.