Since the last three years, we’ve dreamed of living on Crete. Now we are here, the Argophilia founders with our son Paul-Jules. The trek here was a fascinating one with many highlights we’ll share in the days to come. For starters, here’s a collection of moments we’ll never forget. May they spur you to visit this magical place, and help you choose the right way of passage too.

Leaving Germany in our wake was quite frankly, a life highlight. For outgoing people like the three of us, over a decade there was a kind of solitary confinement most of the time. The “escape” was not one that provided for photogenic moments. Mihaela drove most of the way through Bavaria and the Austrian Alps in either drenching rain or stuck in a snaking traffic jam to strike horror into any New Yorker’s soul. Add sheer cliffs and honking Porsche drivers to a Manhattan jam and you get the picture. I took over as we took in the Italian Alps past Verona and then past Bologna to the seaside port of Ancona. The image below is from the stern of Minoan Lines’ Cruise Europa, one of the largest ferries in the world. 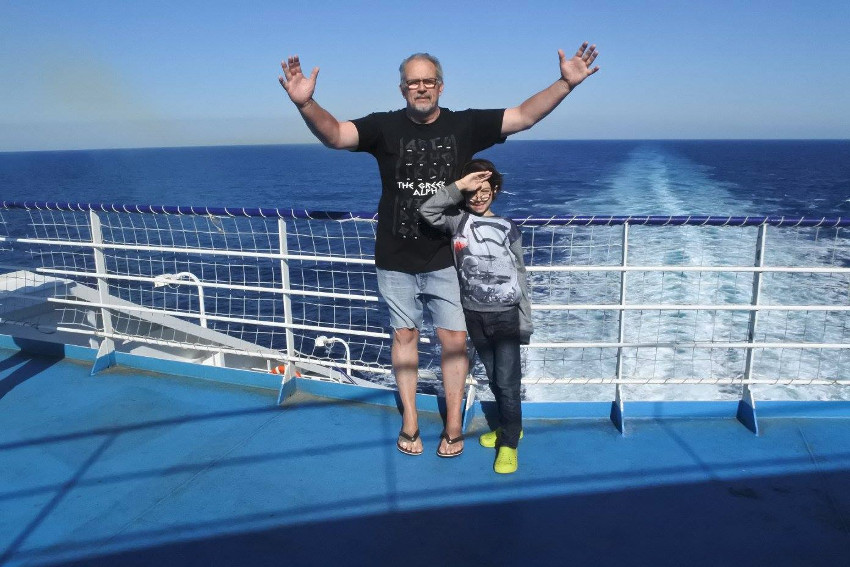 Cruise Europa is a huge ferry. Here Paul and I enjoy the sea breeze and leave Germany in our wake

Driving like a madman to make our ferry to Patras in Greece, I could not help but take note of how well maintained the Italian roads are these days. From the impressions the Germans give, anything but German pavement is sub par in Europe – which is of course ridiculous. We did manage to get to Ancona on time thanks to a delay in the ship’s departure. I also took note of Minoan Lines’ sales and support staff’s professionalism throughout. If only the crews were so friendly and efficient! The Minoan Lines ship has every convenience, and we were largely satisfied (mostly from the excitement I fear) with service aboard. In the end, the dogs peeing and pooping on deck, the backpackers camping around every corner of the ship, and the general disdain crew seemed to have for passengers detracted. However, negative my review may be though, Mihaela and Paul sopping up the wonder of the sea made up for it all. 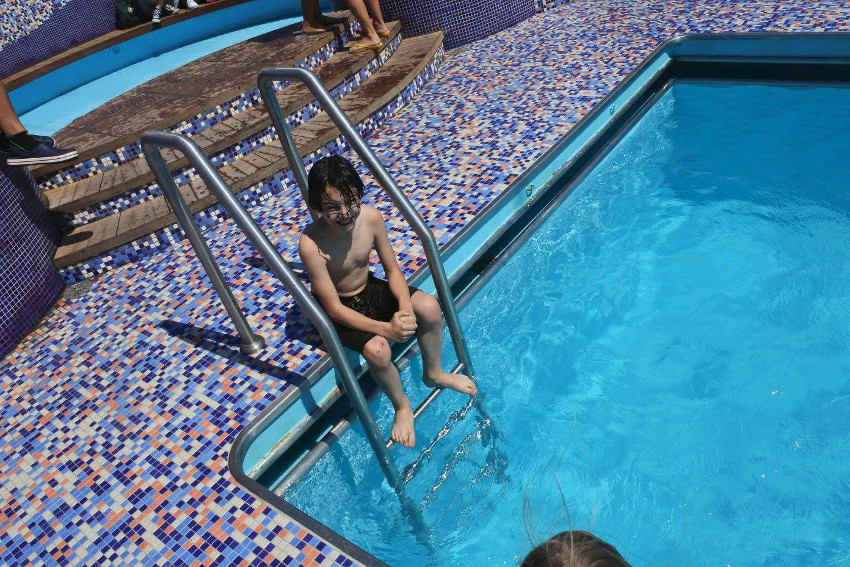 Paul-Jules was on a constant adventure aboard Europa

At sea all night, Mihaela curled up in the large portal of our cabin after we upgraded from the aircraft business seats. More on the upgrade in later stories, but this cabin was a welcome sight after airplane seats no airplane would mount. If you are tempted to take the ferry from Ancona one day, please be prepared for some salty dog seafaring thrills. Drinks are good, and so is the food, but the service comes from apparently overworked crewmembers. 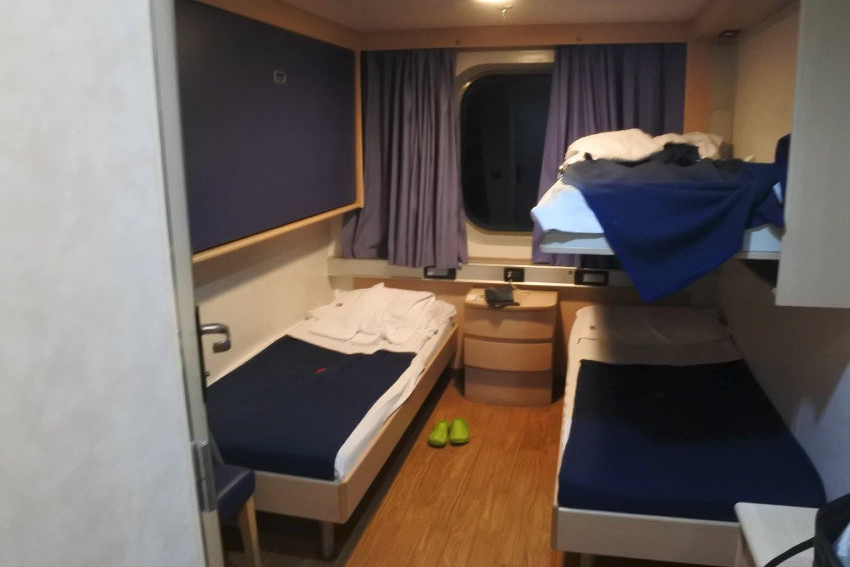 We upgraded to a nice but Spartan cabin owing to crookedness and etc.

A good night’s sleep met with morning and our arrival at Patras on the Greek Peloponnese, where we disembarked for the drive to Piraeus and the ferry to Crete. Little did we reckon that the delay at Ancona would cost us the connection to Minoan at Greece’s biggest seaport. As it turned out, this would be fortuitous and a godsend. We made Piraeus at nightfall, and the darkness obscured the right path to the ships. Disappointed, we scanned the skyline for a hotel to dive into for the night. We found a two-star affair called Pireaus Port Hotel, which also underwhelmed us all. Arriving worn out and hungry, the best we could get from the staff there was a smile and a finger pointed at an all night deli down the street. But wait, the story takes a turn for the epic positive the next morning. # 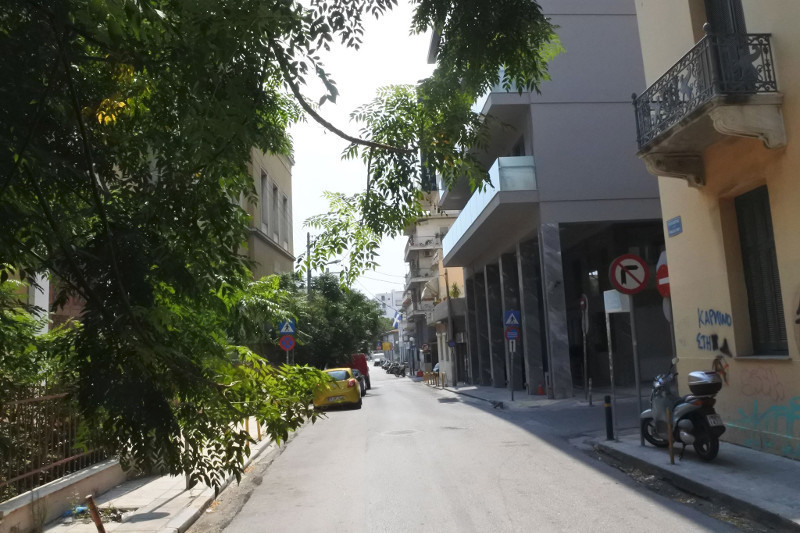 Early the next morning I ventured down to the port to reconnoiter for tickets and the best way to approach with our car. Leaving Mihaela and Paul to sleep, I walked the half a kilometer to the busy docks. It was here I met my first Greek angel, a man named Dimitrios Kokkotis. Walking across the street from the wharf to locate Minoan Lines to buy tickets, a kindly gentleman took note and asked if he could help me. A travel advisor for Book It Now, Dimitrios proved to be more than a ticket salesman, and travel adviser truly does suit the man. A young guy in his later 30’s, Dimitrios calmed my fears of missing another boat and took up the task of educating me in Greek language as well. I’ll never forget standing in his office in the sweltering heat, absorbing an encyclopedic understanding of linguistics and Greek culture. After going back to the hotel to gather up Mihaela and Paul, I came back for tickets and for Paul’s first lesson in classical Greek. Mihaela fell for Dimitrios too, and ask for a place to occupy our time during the long wait for the Anek Lines/Blue Star ferry that would deliver us to Heraklion. Here’s where the story gets more interesting, and our journey takes on some wonder. 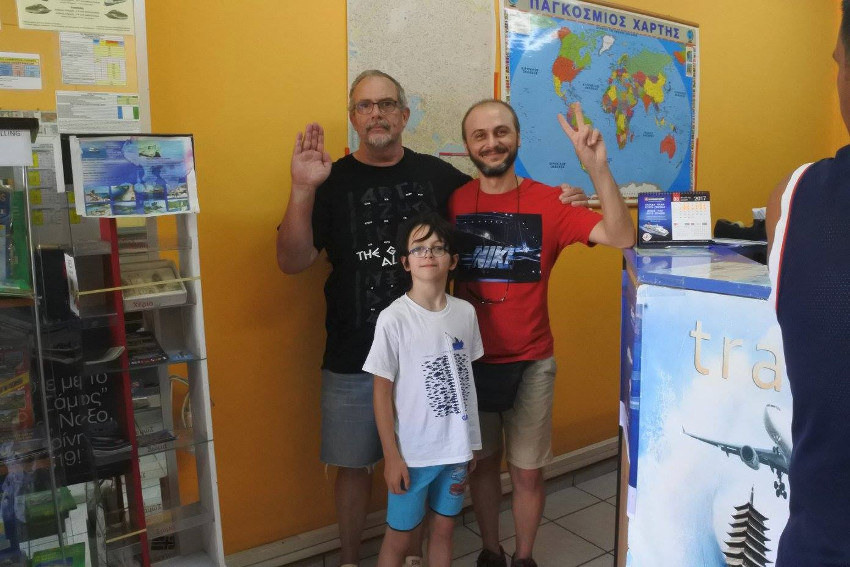 Me, Dimitrios, and Paul at book-it-now.gr offices Piraeus

The Heraklion ferry was not scheduled to depart until 7 PM the night of Mihaela’s birthday, so we have about 9 hours to kill until boarding. At Dimitrios’ suggestion, we avoided the crowded and expensive marina area of Piraeus and instead opted for finding a nice cafe or hang out along Akti Themistokleous overlooking the bay. This turned out to be fortuitous as well, as we found another friend at the cafe, bar and coffee spot Aqua Blue. On the hottest day of the year Stefano Fren’s ambiance bar turned out to be a bit of heaven. Besides the fabulous fruit drinks and drafts, the famous DJ’s little club bathed us in soft house tunes and laid back sea gazing wonder. With the best view of the bay around, Aqua Blue served as our siesta central in the waiting hours. Friendly is not the word to describe Stefano, who even offered us a stay at his villa on our next visit. 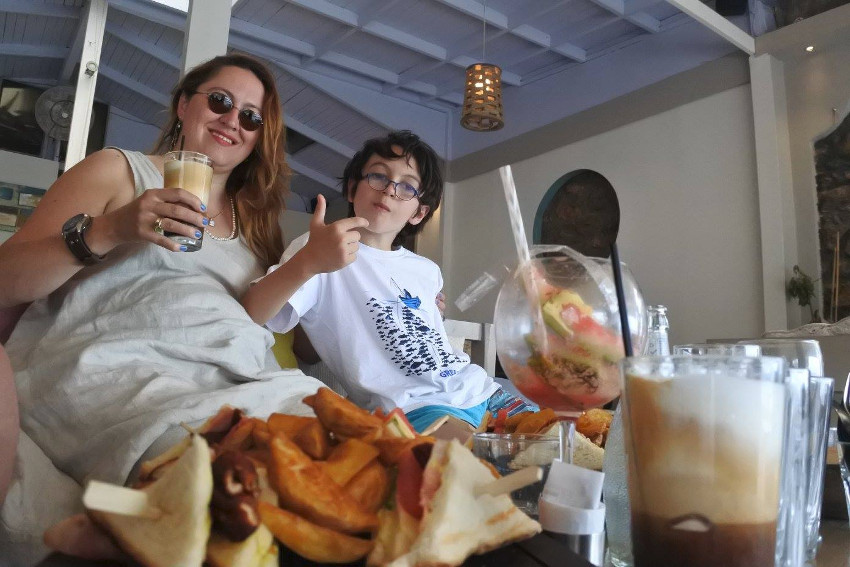 Stefano Fren’s Aqua Blue ambiance bar – the sandwich in the foreground is the best club sandwich I’ve had in 30 years by the way.

After Mihaela and Paul took a dip in the sea below Aqua Blue, we parted company with Stefano and his great crew to head for Gate #3 and Blue Star Ferry’s (with Anek Lines) Blue Horizon. From the moment we drove up to the stern of this cruise ferry our journey took on a new complexion. Maybe it was because it was Mihaela’s birthday, or perhaps Poseidon had decreed it, whatever the reason Blue Star was light years ahead of Minoan Lines on all accounts. I’ll be doing an exclusive on this extraordinary experience, but suffice it to say Salim and the whole crew of this smaller ferry excelled. 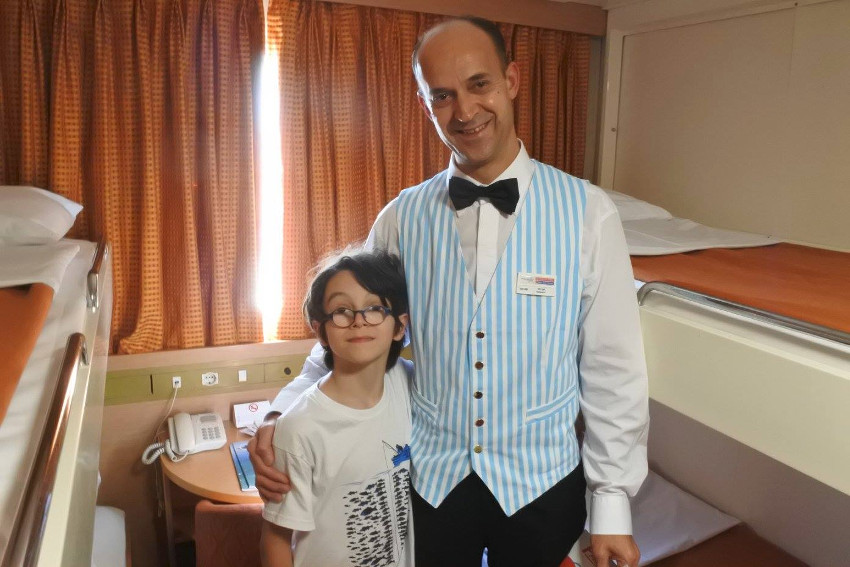 Blue Horizon’s staff were amazing, here Salim shows us to our cabin

Where only the occasional or hard won smile met us on Minoan Lines Adriatic cruise, Blue Star crew members tipped the scales at wonderful. Salim, in the image above, made it his mission to see our short voyage was memorable. The ship was pristine by comparison to Cruise Europa, and the service and food superlative. The I actually asked one of our new friends why there might be such a difference and I was surprised by his answer. On Minoan Lines, the head waiter at Blue Horizon’s a la carte restaurant only had positive things to say. As to the Blue Star crew’s professionalism, he supposed their experience at luxury cruise lines like Princesss Cruises made the difference. Regardless of the “why” – Mihaela’s birthday cruise to Crete was made memorable by these extraordinary people. 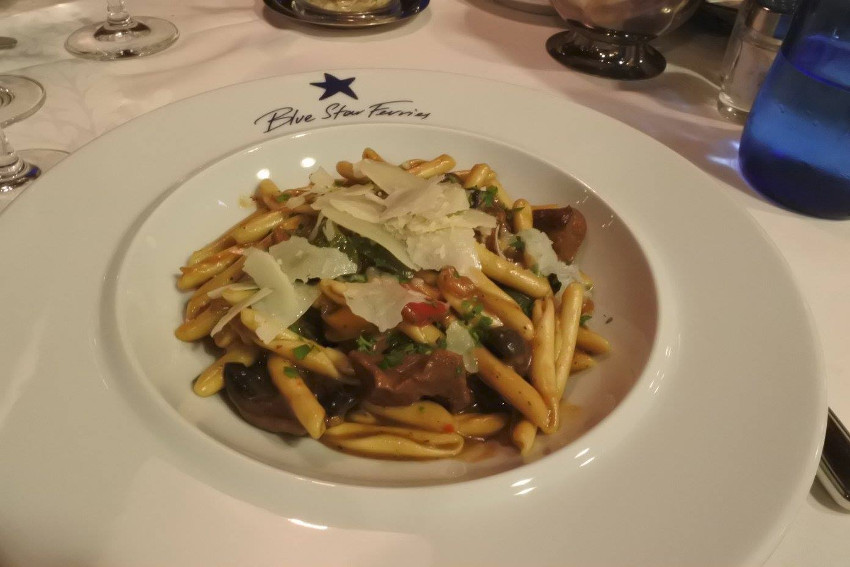 In future posts I’ll reveal how Paul-Jules was made an official crewmember of Blue Horizon, and all about how Mihaela ended up locking herself out of our cabin at 3 AM. For now I hope I’ve peaked your interest in not only Crete, but in ferry travel in the Aegean and elsewhere. We’re slated to head to Santorini soon aboard another ferry.

Coming August 21st – Greek Lighthouses Open to the Public
5 Must-See Places in Greece Reachable by Ferry
Greece 2022 Should Be Dubbed the “Omicron Summer”
British Offer to “Loan” Greece the Elgin Marbles
Previous: Meeting Point Turkey enters the Capital 500 list for the fifth time
Next: Santorini Experience Comes to Oia and Fira in October