Faces of Russia: Protesting Against Protests in Art

“So what are you going to do about it? Protesting against it won’t help. I know this for a fact”,  I hear her say and it’s almost too hard to believe that the person sitting in front of me is a fourteen-year-old artist.

This is the first Liza’s (Elizaveta Dygdanova) solo project with a loud name “Protest” that has caused quite a stir among the savvy. Not even so much because her choice to address “Trump” protests in one of her central paintings, but because – and that’s what got me interested – how many teenagers do we know who address such problems at all? Until today I knew none. 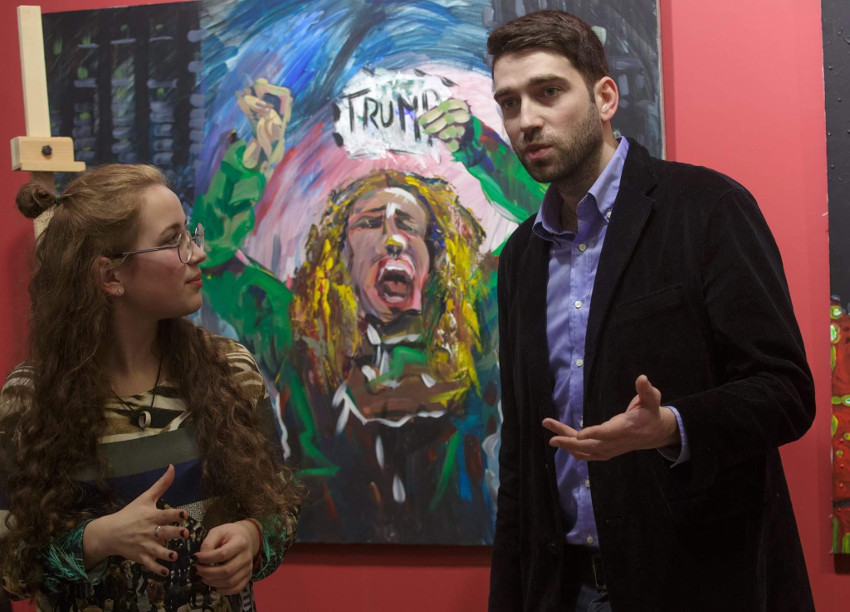 The art of Elizaveta Dygdanova by Vitaly Vakhrushev

Anna: So what do you suggest? (I ask, bewitched by the composed posture, so unnatural for her age)

Liza:  We all should be something. Building, constructing, creating, helping – in other words doing something that we were brought here to do. And we weren’t born to be protesting for the rest of our lives.

Liza: I think they should accept the will of the majority that voted for Trump. And honestly, I just don’t believe people would protest in their free will. (without hesitation) 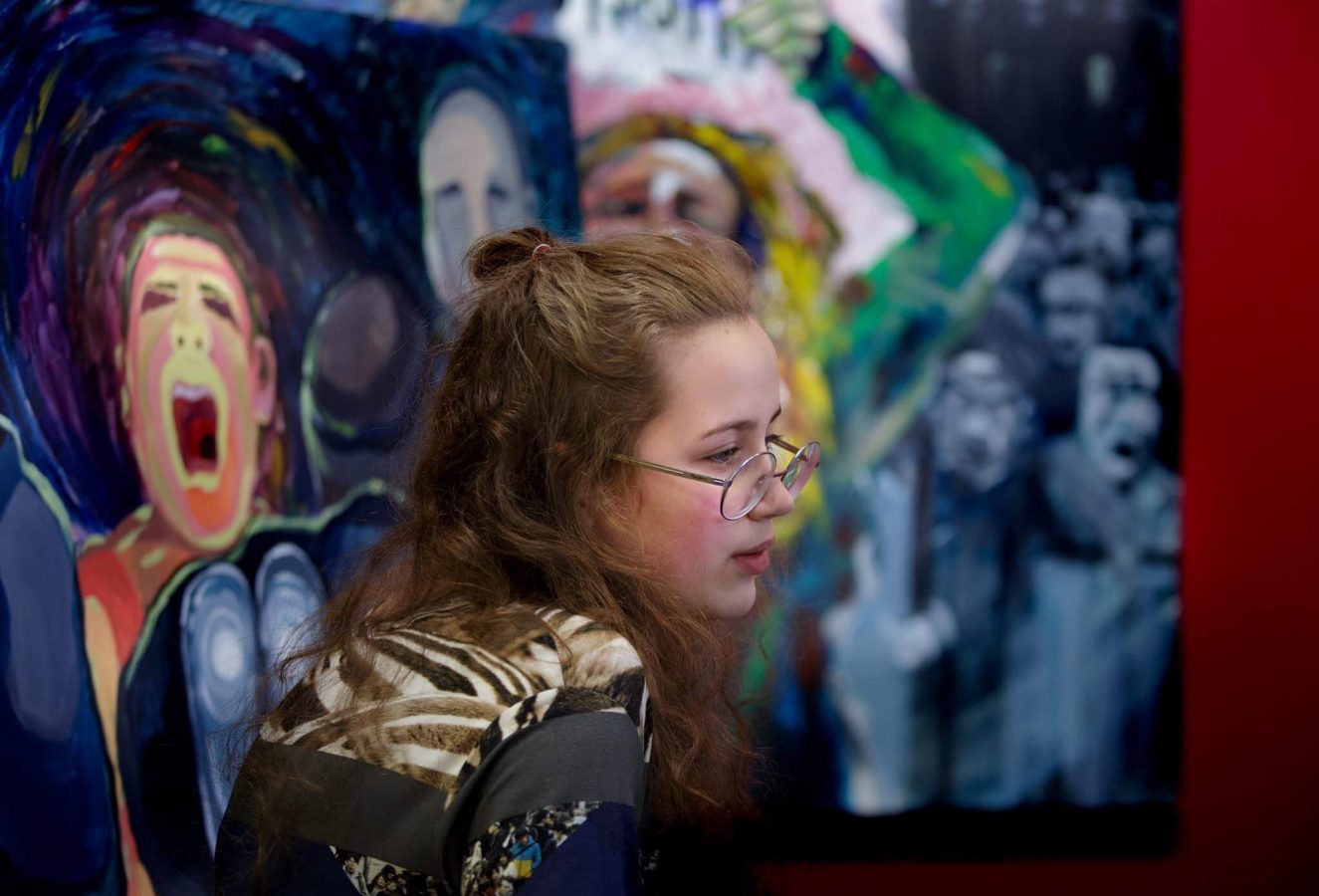 Anna: In whose will then? Who makes them do that?

Liza: There’s a power that stands above every president. I think they are interested in such protests, so they feed the media and instruct them with the lies to tell.

Anna: Is this what you were trying to say in your paintings? – I ask studying the paintings behind her back. Occasionally them across as patches of herself stitched together on different canvases, but looking back into her eyes, they are just reflections of her feelings.

Liza: I tried to address the problem of the uselessness of it all. Protests are nothing but a theatrical performance. People get themselves convinced that they truly believe in a certain idea and then they let that idea occupy their lives. The majority of people, even if they are not out in the streets, protesting against an idea or a person, are still being manipulated by the media, whether it’s against Russia or against the West.

Anna: I know that you’ve traveled quite a lot and you’ve probably seen the difference in how Russia is seen in Europe.

Liza: Quite so. When I was in Germany, I noticed that the news about Russia were exaggeratedly negative, however, I must say that the same thing is happening on Russian television. There’s too much exaggeration when it comes to topics like illegal immigration or, say, same-sex marriages (impatiently). 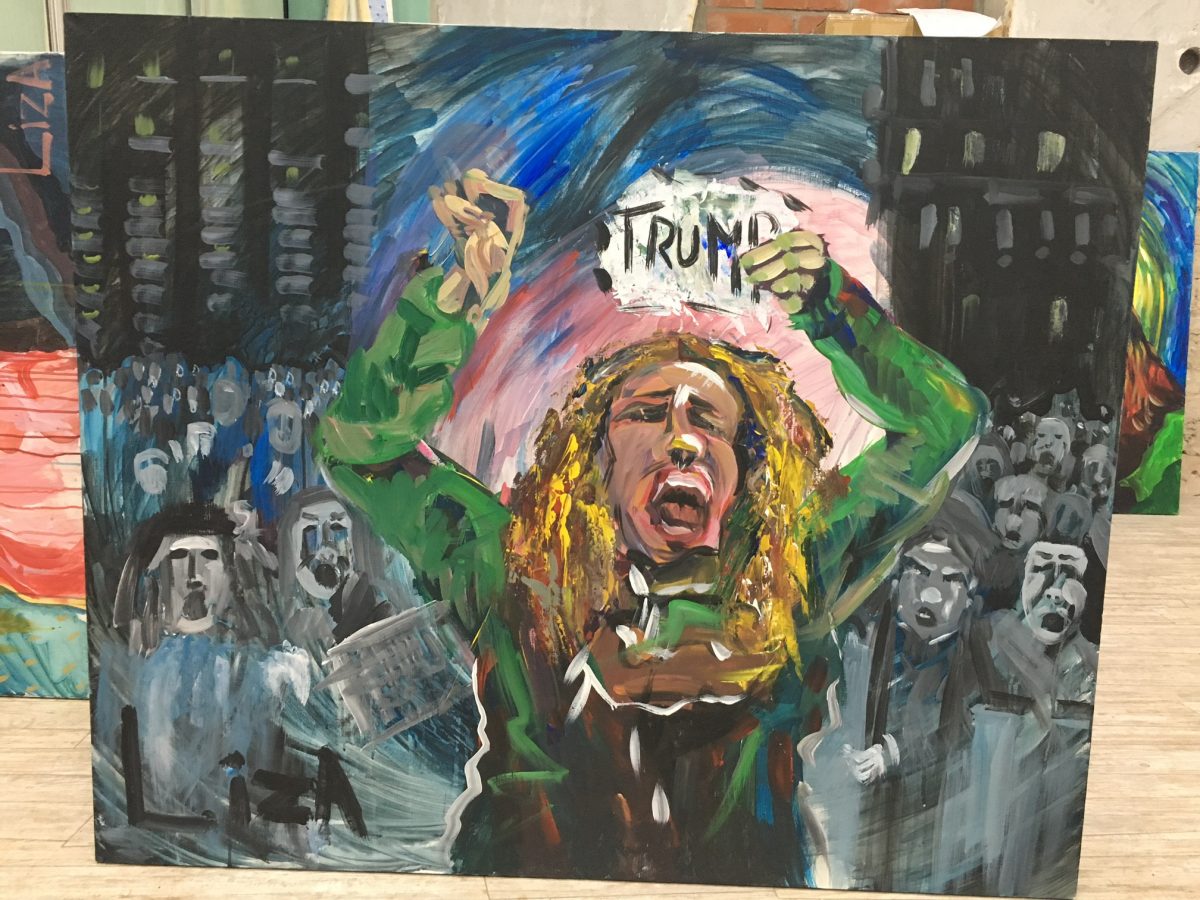 A work by Elizaveta Dygdanova

Anna: What inspired you to create these paintings? It’s quite unusual for a 14 y.o. to be interested in politics. Do your classmates share your interests? (I smile).

Liza: Of course they don’t. All they care about is getting good grades, getting into university – the theory of life, in other words. Too bad they don’t teach us how to start a business, follow our dreams or build a family – that would be more useful. It’s for this reason that I prefer the company of older people, those who can teach me something (she responds with a glowing face).

Anna: Is there one person in your life who influenced you more than others?

Liza: My grandmother. She is a born artist but she never received any formal education which she always regretted. I owe her everything. I remember she would always sketch me while I was playing and that inspired me greatly. I wanted to tell my stories. At first, it almost felt like keeping a diary, then my talent was noticed at the kindergarten, and my parents were advised to give me proper artistic education.

Anna: So it’s your grandmother who talks to you about politics and problems of the modern society?

Liza: Nods with a prompt “yes”.

Anna: What does she tell you about the former Soviet Union and the way young people were back then?

Liza: She is mostly outraged with the modern society. She tells me people have forgotten what the real values are. All they pay attention to now is what clothes you wear, what iPhone you’re using or what car your parents drive. That’s what most people base their relationships on – the money or any material interest, – she exhales heavily, looking rueful.

Anna: Will you be addressing this in your future works?

Liza: I intend to. I believe we should all do something, whatever we are good at. My mentor, Arseny Vlasov, and I always discuss what might be of a particular interest to people, what could make them feel heard. That being sad, every epoch has its own particular issue that must be addressed. Only the great artists create paintings that turn out to be eternally important, but that I can only aspire to.