A vintage train hauled by the oldest steam locomotive still in use in the country, and having four coaches built around 1900 was inaugurated last week in Bucovina, Romania. The train is part of a touristic program “Pelerin în Bucovina” (Pilgrim in Bucovina) that aims to promote this part of the country as an attractive tourist destination.

Pilgrim in Bucovina is an international ecumenical project that promotes Bucovina monasteries and cuisine, and not only. The program intends to raise awareness about other attractions in the area, like the Medieval Festival of Suceava, the International Trout Festival in Ciocanesti, nature reserves and parks, and scenic train rides, of course. 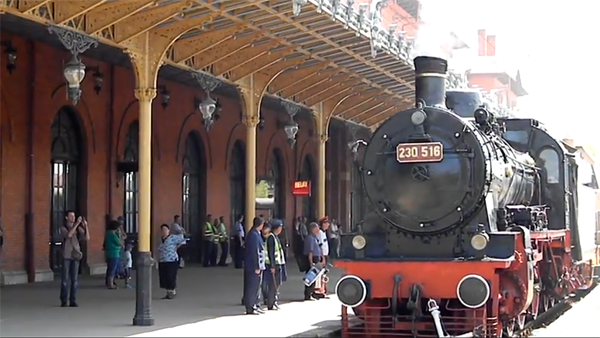 The first ride of the historic train took place Thursday, August 4, 2011. The intention is for the train to continue tours on the routes Suceava-Putna and Suceava-Moldovita this weekend, in the hope that it will become a favorite tourist attraction. The cost of a ticket is 14 RON (about $5 or $3,50).

Unfortunately, the program has been received with more critique than lob, as some Romanians believe that there is no need to spend money advertising what people already know. The whole program had a poor PR campaign, with media coverage only in Romanian, and some tidbits of news in Vienna, after a group of cyclists left for Bucovina, to Basilica Minor at Cacica, the Putna Monastery and the Hagigadar Church in Suceava. Assuming that Romanians know about Bucovina’s wonders is a safe bet. However, believing that foreigners are aware of what Bucovina has to offer is borderline stupidity.

The Pilgrim in Bucovina program should have a carefully crafted PR campaign, ran by a company that knows the ropes of the business. Editorials should run on the BBC, Reuters, Associated Press, and other first tier media outlets – journalists are interested in learning about new, affordable tourist destinations that also have a lot to offer in terms of culture, cuisine, traditions and so on.

Is Bucovina exclusively a destination for ecumenics? By no means. Its natural wonders are beyond compare. The land is ideal for hiking, mountain biking, trekking, climbing, backpacking, river rafting, paragliding and much more. There are many ways to know this scenic region of Romania, not enough publicized. It is a region of calm, natural beauty and fascinating folk life, a region of traditions, and most importantly, a place that still offers a glimpse into what life here used to be.